William & Mary iGEM 2022 is all about the chassis.

“The choice of an appropriate chassis for the engineered circuit is absolutely critical because it influences every other aspect of the engineered circuit that it hosts, from safety considerations to how well it will actually work,” Margaret Saha explained. “This is particularly important as synthetic biology aims to become more ‘fieldable,’ that is, taking it outside of the laboratory and making it work in situ, in the area where you want that microbe or that system to actually perform and do something useful to address a problem.”

Saha, Chancellor Professor of Biology at William & Mary, is the team’s advisor. Alana Thomas ’24, a biology major, and Avery Bradley ’23 (biology) are co-captains of the 10-member William & Mary iGEM team. Beteel Abu-Ageel ’22 (biology) serves as a student advisor. The team will be going across the pond to Paris to present their work at the Oct. 26-28 iGEM competition, an event that’s been called the “World Cup of Science.”

iGEM — the International Genetically Engineered Machine (iGEM) Foundation — began in January 2003 as an independent study course at the Massachusetts Institute of Technology. The program expanded over the years, drawing teams from every continent but Antarctica.

William & Mary’s teams have done quite well in the iGEM competition, most years posting up results superior to the entries from large research powerhouses. In 2015, William & Mary took home the Grand Prize, and a trio of other honors, from the iGEM Grand Jamboree. Each year, every iGEM team comes up with its own project.

“This year we’re doing a software project,” Thomas said. “And the project is based around chassis selection. The chassis is usually a species of bacteria for us, but other types of chasses such as yeast or eukaryotic cells are also possible.”

She went on to explain that synthetic biology concerns the design of “circuits,” assemblies of biological components. And those circuits are assembled upon a chassis selected to do the job. Chassis selection, Thomas said, is important for fieldability. She said that term refers to deploying the engineered system outside of a purely laboratory environment.”

She added that there are many current roadblocks to fieldable synthetic biology systems right now including safety and circuit performance. But the selection of a safe and effective chassis is an initial barrier.

Bradley said the W&M iGEM team realized that while chassis selection was an important step for fieldability, there was not a simple way for a for researchers to choose a chassis that they know will work well in its intended environment.

“So we decided to take our computational, programming, and data analytic skills and develop a software program that would allow other researchers to predict a chassis that works optimally for the specific environment in which their system would be used,” Bradley said.

The William & Mary project is essentially a computational undertaking, with a necessary wet-lab component, and Walker Knapp explained that the team’s final project is a piece of software.

“This software uses a wide array of different analysis techniques to try to generate chassis recommendations — including machine learning and artificial intelligence — to generate an output of how appropriate each chassis is for a given environment,” Knapp said. “We attempted so many different approaches to optimize our predictions of best chassis choice.”

In order to develop the data-driven software programs, the team focused on chassis selection for synthetic biology applications in water, soil and the gut microbiome. Bjorn Shockey talked about how the team assembled a dataset of some 30,000 different soil measurements from around the globe.

“That’s including various metadata points,” he said. “Exact location, as well as soil temperature and moisture levels. One of the biggest challenges that we faced was actually collecting that data and synthesizing it into one dataset.”

The same was done for water, air, and the gut microbiome, he added.

Synthetic biology — especially as practiced within iGEM — is interdisciplinary by nature. Knapp stressed that the interdisciplinary nature of the William & Mary chassis project is even more pronounced than usual.

“This year, it is really incredible how many different fields we’re tying together for our project. We have all of these really knowledgeable biology experts who are bringing their knowledge into the chassis selection discussion,” they said. “And we have our math teams — a super diverse set of majors— bringing knowledge of machine learning and data processing, different modeling techniques, all into this complex, integrated final product. We really couldn’t have built it without the sheer diversity of knowledge we have on this team.

“And we got useful advice from Professors [Mainak] Patel, [Greg] Hunt and [Leah] Shaw —all in mathematics —and Professor [Greg Conradi] Smith in applied science,” Knapp added.

And the W&M iGEM team does far more than only developing a complex synthetic biology project: they also are heavily engaged in outreach and education. This year they collaborated with the School of Education to present to students in Camp EAGER and developed an engaging game for middle and high school students called Re-Terraforming Earth to teach what synthetic biology could do to make a sustainable planet.

“We are passionate about exciting the next generation of students about the promise of synthetic biology and bioengineering,” Fleeharty said. 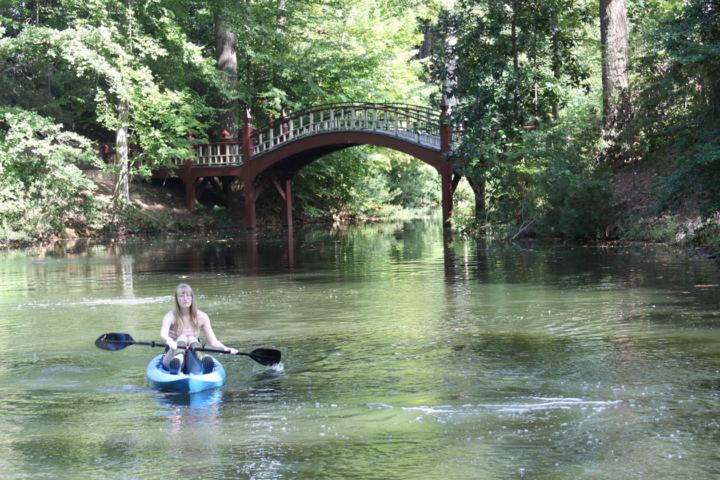